A minimalistic design Lovely Cat Shoulder Bag that every cat lover should have! Either if you’re a student, parent or just a fashionable diva. This shoulder bag won’t disappoint you.

This Cat Bag is in High Demand and might not be available soon. So don’t wait and secure your Lovely Cat Shoulder Bag Today!

*Due to the difference between different monitors, the picture may not reflect the actual color of the item. But, we guarantee the style is the same as shown in the pictures.

*If you want to buy this item and your country is not in our shipping list, please contact us at info@catcabz.com.

My Daughter loves this bag. It's really cute and sturdy! I would definitely buy more items from this site again! 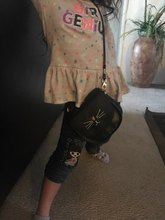 This bag is a small to medium size at most in my opinion. Well worth the price because you're paying for the quality. I realize when I buy similar bags just ten bucks cheaper it's noticeable in both looks and the quality/strength. It doesn't hold too much, but it holds a pretty far amount. So far I had a small notebook in there, my wallet, keys, loose change, mini first aid kit, will add makeup, ear buds, charger, moisturizer. It will get packed lol, but I took out the mini notebook and there's tons of space to go around now! I do write reviews but not often because I've purchased over a hundred things on CatCabz after a year of use. xD So as you can see it'd take a while, BUT I decided to write one for this bag because there were no reviews and honestly, I wasn't even sure if I wanted this bag because of the lack of reviews. But because I love it, I don't want someone else to think what I thought and possibly miss out on the chance of purchasing it. I even included pictures, which I never do haha. This is my longest review ever but I hope it helps someone, even just one customer. Later! :D 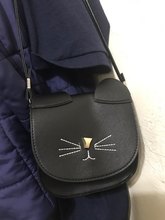 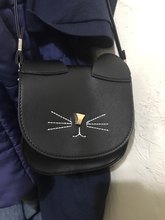 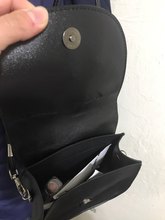 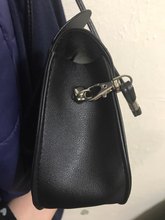 I'm in love!! So many compliments on this little meow purse! Stiff, nice quality leather, and great form! I absolutely adore it! Anyone who loves cats, will love this it's a must buy!! It is on the smaller side, however it fits my full size wallet, phone, keys, and some make up. So it does the job! Thank you, CatCabz! 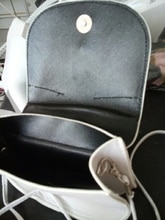 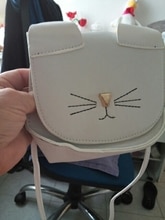 Must have for any crazy cat mom! My go to purse for the last few months. Perfect size for a small wallet, phone, sunglasses, and some other small items!

The bag looks really small but I'm surprised by how many items you can fit inside it. Also, it's not bulky so it's just perfect for me. Thanks CatCabz!